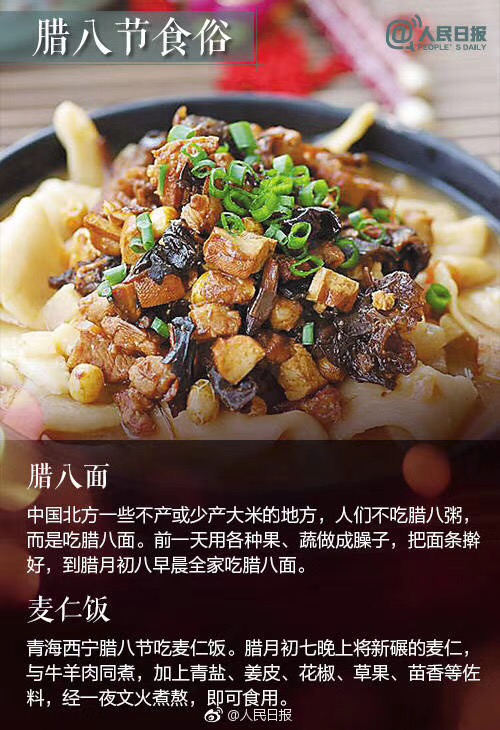 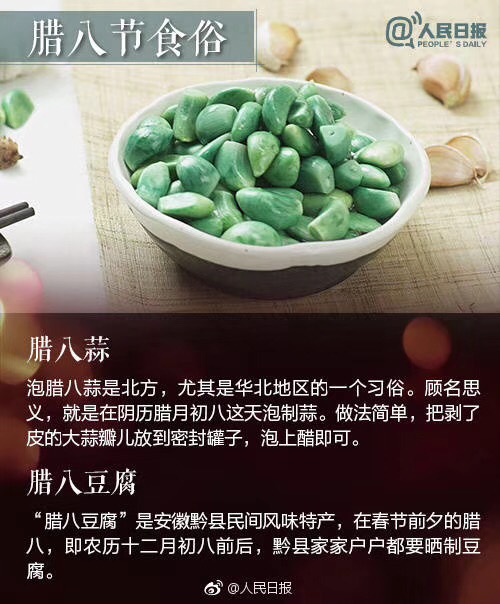 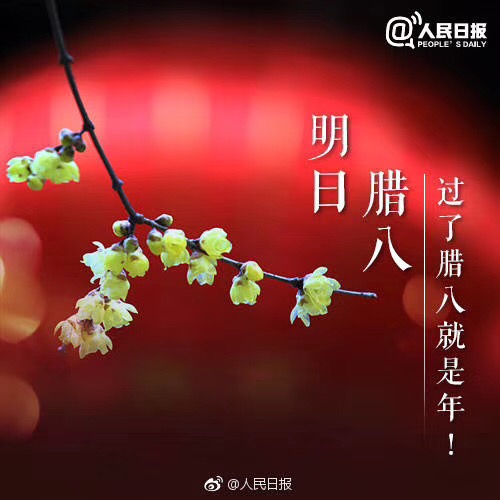 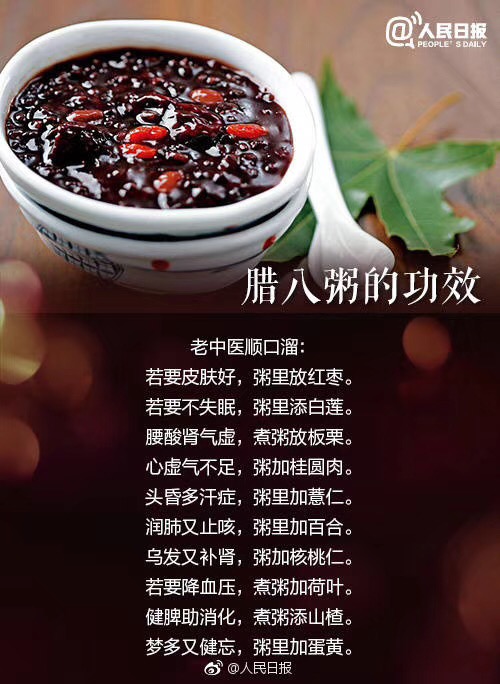 The Laba Festival is a traditional Chinese holiday celebrated on the eighth day of the twelfth month of the lunar Chinese calendar.

“La” is the name given to the 12th lunar month. And 8 is pronounced as “ba” in Chinese, which translated is “Laba.” There are several legends about the origin of this festivity and we could not tell which one is true.  But what we know today is that this festival started as a sacrificial offering to ancestors.  It was also a time for the ancient Chineseto pray to heaven and earth that there would be a bountiful harvest.  Many people hoped for good luck as well for the coming year.   Traditionally, the Laba rice porridge is the most important element of the festival.  Generally, the porridge contains eight ingredients which can include glutinous rice, red beans, millet, Chinese sorghum, peas, dried lotus seeds and some other ingredients. Such as dried dates, chestnut meat, walnut meat, almond, peanut, etc.

The porridge must be boiled for many hours and then offered as a sacrifice to the ancestors.  This must be done before noontime. Also, it is tradition that family members eat the porridge together.  Then they leave some as a symbol of hope for a good harvestthe coming year. Another custom is the soaking of Laba garlic.  Garlic is soaked in vinegar for more than twenty days starting from Laba festival.

Then when the Chinese New Year comes, the garlicand vinegar is used alongside jiaozi on the table.(From Weibo) 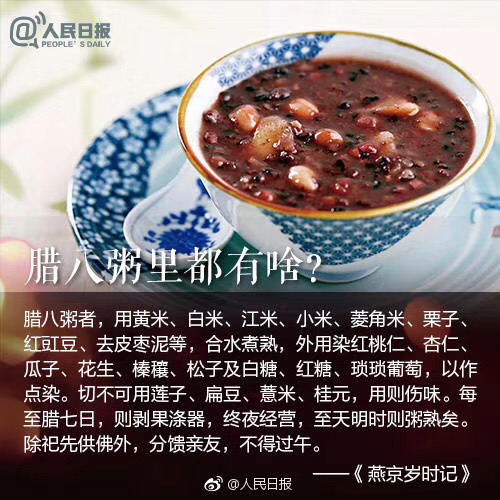 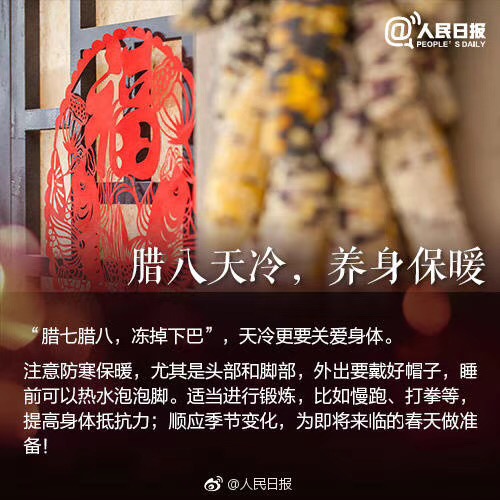 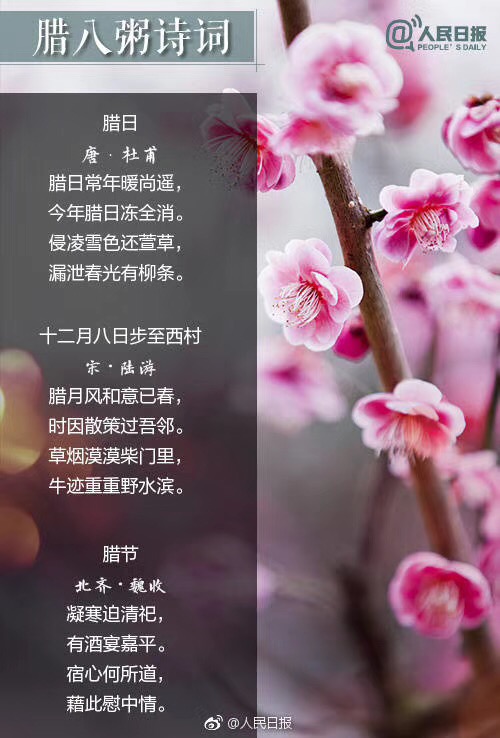 Hundreds of VQ189 Table Top Racks are ready to ship

Hundreds of VQ189 Table Top Racks are ready to ship Chinese New Year or Chinese Spring Festival is coming, it is Delivery peak time before the big holiday VQ189 is An ideal table top rack for marble, granite and other stone tiles. Which is useful in stores, showrooms and... read more

The 9th BRICS Summit “BRICS: Stronger Partnership for a Brighter Future” will be held in Xiamen, Fujian Province in September 2017 under China’s Chairmanship. 2017 XIAMEN BRICS SUMMIT (From 04th Sep. -06th Sep.，2017)  – Shipping Restriction Traffic control: From 24th Aug. to 06th Sep. , car with Xiamen circulation license is allowed in Xiamen. From 24th Aug. to 29th Aug., truck with Xiamen circulation license is allowed in the whole Xiamen city. From 30th Aug. to 06th Sep. in Xiamen city area, all the truck even with Xiamen circulation license is not allowed in Xiamen city area. From 30th Aug. to 06th Sep. in Xiamen HAICANG area, Truck with Xiamen circulation license is allowed only during 22:00 pm to 05:00Am. Air export : NH & CV will cancel their cargo aircraft service from 30th Aug. till 09th Sep. And China Southern airline will adjust their cargo receive place from Xiamen to JINJIANG. Ocean Export: For LCL:  All the co-loaders in Xiamen is update that for the vessel departure from 30th Aug. to 06th Sep. CFS cut off time is 28th Aug. 17:00pm. Customs release time is 29th Aug. 17:00pm. For the vessel depature Xiamen from 07th Sep. to 10th Sep. under current situation. It’s unable to confirm if consolidation service is available or not. For FCL:  There is not any official notice from carrier for any vessel cancelation before or during the BRICS Summit till now. For all the terminals in Xiamen, they can accept the container earlier gate in termianl for the vessel departure before 10th Sep. And the additional storage fee which may occur in termina can be waived. XITC terminal in Xiamen is update today Their terminal website will be closed from 22nd Aug. till 06th Sep., 20:00, all the container in & out movement, container loading stutus during these days is only available by manul checking. Import shipment: For all the import shipment to Xiamen.  Xiamen customs will inspect the cargo which makes the procedure will be longer than usual. read more

BRICS is made up of China, Brazil, Russia, India and South Africa. The first BRIC Foreign Ministers’ Meeting was held in 2006 among China, Brazil, Russia and India on the margins of the general debate of the 61st session of the United Nations General Assembly,... read more 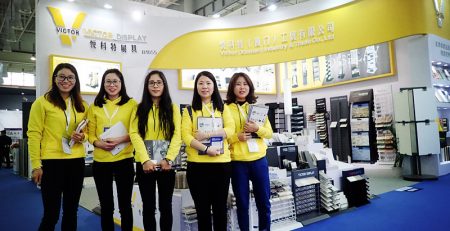 Xiamen International Stone Fair has come to a successful conclusion.

Victor Team Hiking in Beautiful Autumn The autumn tour not only enriched the amateur life of the staff. But also through the cooperation between the team members and work together to enhance the understanding between colleagues and teamwork awareness. Believe that in the future work we will be... read more

Why you need good display stands for stone tile products